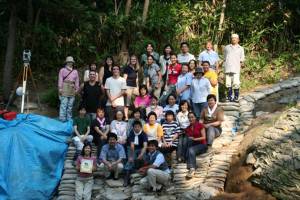 BERKELEY SANNAI MARUYAMA PROJECT  – Located in Aomori Prefecture, northern Honshu, Japan, Sannai Maruyama is a large Early-Middle Jomon settlement site. From Summer 1997 to Summer 2008, the Berkeley team collected soil samples at this site for macro and micro faunal and floral remain analysis, organic residue analysis and provenience studies of pottery, and radiocarbon dating. The samplings were conducted in conjunction with the summer field school class of University of California (UC), Berkeley. The project were funded primarily by various internal grants of UC Berkeley, Sannai Maruyama Special Research Grant of the Government of Aomori Prefecture, and the institutional research grant from the Henry Luce Foundation, UNDERSTANDING LIFEWAYS AND BIOCULTURAL DIVERSITY IN PREHISTORIC JAPAN.

GOSHIZAWA MATSUMORI PROJECT – From Summer 2008 to 2010, Junko Habu and her students excavated the Goshizawa Matsumori No. 4 site, a small Early-Middle Jomon settlement site located approximately 20 km away from Sannai Maruyama. The primary goal of this excavation project was to examine intersite variability in lithic assemblage and paleobotanical data.  The excavation was funded by the Understanding Lifeways and Biocultural Diversity in Prehistoric Japan, in conjunction with summer field school classes of UC Berkeley.
→Japanese Page/日本語

SMALL-SCALE ECONOMIES PROJECT  – From Summer 2014 to Summer 2016, Junko Habu conducted a transdisciplinary research at the Research Institute for Humanity and Nature (RIHN), Kyoto. The goal of this project was to examine the importance of place-based, small-scale and diversified economies for the long-term sustainability of human societies on both sides of the North Pacific Rim. The core components of this project included 1) synthetic analysis of Early and Middle Jomon data from Sannai Maruyama, Goshizawa Matsumori No. 4 and its vicinity, 2) ethnographic works of rural communities and small-scale farmers in Iwate and Fukushima Prefectures, and 3) collaborative workshops with the Shiraoi Ainu Museum (Basket-Making Workshop in May 2015; see Tomakomai Newspaper) and Native tribes in California, including an Acorn processing workshop in January 2016.

Final report of this project can be downloaded from the following:Final report, Small-Scale Economies project

Overviews of the following sub-projects are provided below:

AGROECOLOGY, SUSTAINABLE FOOD PRODUCTION AND LANDSCAPE CONSERVATION (Funded by the Sumitomo Foundation via RIHN, 2020-)- This project proposes to examine the resilience of agroecosystems at multiple spatial and temporal scales with an emphasis on macro-scale analysis (i.e., regions and the longue durée). The project aims to understand ecosystems based on cutting-edge theoretical discussions on the concepts of Traditional Ecological Knowledge (TEK) and landscape. Using the results of transdisciplinary research by social scientists and biologists, the project will present a blueprint of resilient agricultural systems for future generations.